n our series of letters from African journalists, Algerian-Canadian journalist Maher Mezahi reflects on the recent moves by France to repair relations with its former colony Algeria, especially concerning the bitter war of independence.

I ask this in the wake of his recent admission – after 60 years of official denial – that the French army tortured and murdered the Algerian nationalist hero Ali Boumendjel.

This recognition came as part of a series of measures aimed at reconciling France and Algeria after more than a century of colonisation that ended in 1962, following an eight-year war.

The reaction to Mr Macron’s statement here in Algeria was tepid.

That may be because of the mixed messages he’s sent about the impact of the past.

The first time most Algerians had heard of Mr Macron was when he visited the country in February 2017 when he was running for president.

In an interview he went further than any French president ever had and described colonisation as a “crime against humanity”.

The courage of his remarks took most Algerians by surprise. And they had ramifications for the political fight with the right-wing candidate, Marine Le Pen

For the first time in my life, I felt there was the possibility of a French president sincerely examining French-Algerian history, thus setting a new stage for relations between the two countries.

Yet since becoming president, Mr Macron has blown hot and cold on the Algeria issue.

The French in Algeria – key dates

1848: After an uprising led by rebel leader Abd-el-Kader, Paris declares Algeria to be an integral part of France

The admission over the death of Boumendjel elicited little reaction here because, as historians and intellectuals wrote, it seemed futile to mention certain victims and leave out countless others.

One went as far as to say that this was a “Franco-French” issue, indicating that Mr Macron’s statement was not a revelation for Algerians.

Furthermore, his office has said an official apology is not in the works.

Less than a year after visiting Algeria as a candidate, Mr Macron returned as president.

Buttressed by a delegation of politicians, historians and a heavy security detail, the charismatic leader strolled through downtown Algiers. 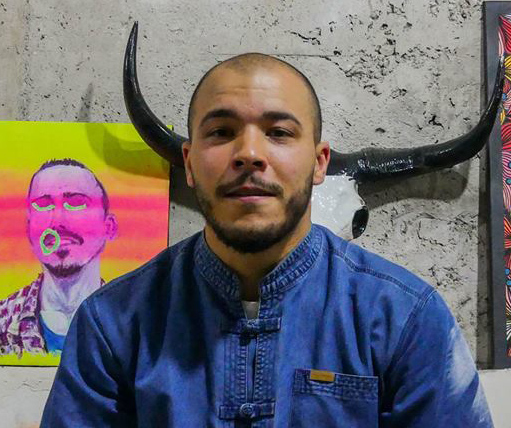 Maher MezahiDespite his apparent progressive policies towards Algeria, Mr Macron had not entirely understood the issue he was trying to tackle”Maher Mezahi
Journalist

He shook hands and took selfies with onlookers before being accosted by a young man who said: “France must come to terms with its colonial past in Algeria”.

After a quick exchange, Mr Macron replied: “But you have never known colonisation!

“Why are you bothering me with that? Your generation has to look towards the future.”

After hearing those brief sentences, I quickly realised that despite his apparent progressive policies towards Algeria, Mr Macron had not entirely understood the issue he was trying to tackle.

In several West African countries, he repeated the same sentiment.

“Three-quarters of your country has never known colonisation,” he said in Ivory Coast.

In Burkina Faso he told students that neither they nor he were from a generation that had known colonisation.

Such observations could only be made by someone who has not lived in a post-colonial state.

Every single Algerian is directly linked to the trauma caused by French colonisation.

Our schools, streets and stadiums are named after famous revolutionary figures and dates.

Our architecture, food and language are all heavily influenced by the 132-year presence of a million European citizens.

I do not come from a revolutionary family, yet my grandfather’s brother was one of thousands of Algerian victims of the Ligne Morice – a minefield laid by the French along Algeria’s eastern border.

As a boy growing up in Tebessa, he fiddled with a booby trap which exploded in his face.

I think of him every time I call my father, who was named after him.

The French government did not officially share the maps of the minefields it laid out across Algeria’s eastern border until 2007.

Throughout the 1960s the French army tested 17 atomic bombs in the Algerian Sahara.

Tens of thousands of local inhabitants have suffered as a consequence, either birth defects or various cancers.

The French government is yet to hand over the maps revealing the location of nuclear waste.

Historian Alastair Horne’s description of the Algerian war of independence always seemed the most pertinent to me.

In the preface to A Savage War of Peace, Horne wrote: “Above all, the war was marked by an unholy marriage of revolutionary terror and state torture.”

If the war itself was an unholy union then what can be said about its divorce?

Most of us young Algerians are not holding our breath for an official apology or reparations.

We are simply asking Mr Macron’s government to drop its condescension and tell the truth about the crimes committed in Algeria and across the continent.

A few weeks ago, it was reported that strong winds carrying radioactive dust left over from French nuclear testing in the Sahara desert blew across the Mediterranean, contaminating the French atmosphere.

For me it was nature’s way of reminding Mr Macron that the impact of colonial crimes is not contained in the history books.